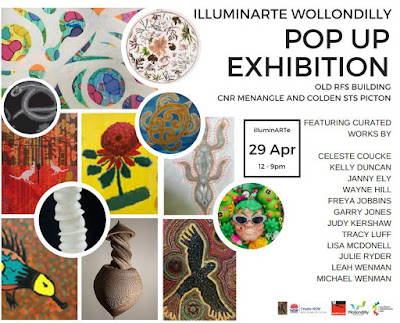 A one-day-and-night event is happening at the tiny town of Picton this coming Saturday, called IlluminARTe. Readers of my blog may recall a post on my images projected onto several of the historic buildings there in 2015. This year I was one of the invited artists to develop work specifically for the old Bank and Post Office Buildings in the main street and my theme this year will be all things seaweed, following on from my NMA residency and recent discoveries.  There will also be a pop-up exhibition (details above) showing two large works on paper of mine.  I will be manning the exhibition from 1-3pm on Saturday, and the other artists will also be minding the exhibition at some point during the festival.  Picturesque Picton has a population of around 4,500, but I have it on good authority that nearly 20,000 people attend the illuminations! Should be a great night out.
Posted by Julie at 15:39 No comments:

Last week was spent helping deliver 'The Nature Collector' school holiday workshops for children at the National Museum of Australia, as reported in an earlier post. Despite thinking I might be out of my depth trying to inspire four-year-olds in the joys of making rocks and seaweed out of tissue paper, it was actually awesome!

Firstly, the children and their adult escorts went to view the two seaweed albums held by the NMA that I have been researching - The Port Phillip album and The Port Arthur Album. Although these were housed in a glass case, everyone really responded to the colours and fragility of the preserved specimens. Then everyone headed back down to the main foyer where the workshops began.

This program was so engaging we had parents and children, grannies and friends all exploring different ways of representing nature - from sitting and drawing, looking at details through a light microscope, developing sun prints (cyanotyping) of nature arrangements, and helping to make a collaborative underwater collage of seaweeds.

In the first week of the holidays I was in Ballarat at a fibre retreat, but also investigating another seaweed album, at the University so my good friend, sculptor Mary Kayser, started off making the seaweed collages with the children.

There were two workshops a day and there were 30 children per workshop (plus adults and littlies).
Each panel of the seaweed collage measured approximately 2 metres x 90 cm and each day we stuck the panel up onto clear glass barriers so the light could filter through.  By the second week we had started attaching the panels to the other side of the glass, so it became much more layered and complex.

It was an exhausting week, but I was surprised at how quickly the time went during the workshops - we just became absorbed in the task, and I hope I have inspired some up and coming marine biologists, phycologists, scientists or artists through my own artworks on display and also the workshop.

MOST IMPORTANTLY......The seaweed albums are only up for 2 more days at the NMA, so its your last chance of seeing them before they are housed safely back in their archival boxes. Who knows when they will be on view to the public again?
Posted by Julie at 13:09 No comments:

Flowers of the Sea

Yesterday was very exciting for me, because I could finally "come clean" about what I had been  doing during the final months of my arts residency at the National Museum of Australia, supported by the Australia Council. Those of you who have been following my residency and blog may have wondered why suddenly all went quiet....!
The above article, written by Fairfax journalist Bridie Smith, featured in The Age, The Canberra Times and the Sydney Morning Herald yesterday, reveals that I had found the identity of the collector of the anonymous "Port Phillip Album" of 19th century pressed seaweeds, collected predominantly in the Port Phillip Bay area of Melbourne between 1859 and 1882. The full article can be read here http://www.theage.com.au/technology/sci-tech/flowers-of-the-sea-20170327-gv7wum.html.

Not only did I discover that the album was made by an elusive and little known collector, Charles Morrison, but that there were also 6-10 other albums by him in other institutional collections throughout NSW and Victoria. This was a great coup not only for the NMA, who now have provenance for their album, but also for me as an artist in residence working within a museum, and researching historical collections, which is where I realise my passion lies. Although that is quite obvious to many who follow my work and exhibitions that usually inspired by  botanical collectors, scientists and objects with social and cultural history. I feel it is also a great validation for all of us who work as artists in residence within scientific or cultural institutions - many people still do not understand what real benefits an artist can bring to the institution, scientist or researcher, and we are often seen as merely capable of delivering decorative outcomes that do not impact upon the serious work done by the institution.

I am now in the process of writing an academic paper for publication and inspired to keep researching these and other collections from the 19th century, so stay tuned!
Posted by Julie at 06:00 1 comment:


As many of my readers will know, last year I spent 6 months at the National Museum of Australia as an artist in residence with the PATE department, which was documented here and in earlier blog posts.

Two of the objects I was fascinated with were seaweed albums from the 19th Century, one from Port Arthur in Tasmania, and the other from Port Philip in Victoria. There have been some exciting developments with these albums, which will be announced this weekend in The Age and possibly The Canberra Times.

However, as a direct result of my residency and research the albums themselves will be on display for the very first time from 8th April until 22nd April at the NMA.  This will co-incide with the school holiday workshops  called The Nature Collector that start next week.

Unfortunately I will be interstate for the first week, but my good friend, Canberra sculptor and artist Mary Kayser, will be inspiring children to create an enormous collaborative seaweed collage at the Museum.  I will be back for the second week to finish off the program. Children will also get to start a nature Journal that they can take home with them, and create some cyanotyping with natural materials. More information and bookings can be found here.
Posted by Julie at 13:14 2 comments: