Finally found time to sit down and post some photos of the last of our GLINT residency at the Canberra Glassworks and Megalo Print Studios.  Also to invite you to the Open Studios tomorrow, Saturday 26th, 2pm in the Engine Room at the Glassworks.  A few of us will be talking about the residency and the works produced - Deb and Nicci are overseas and George is in Adelaide but their works and display and we will speak on their behalf. 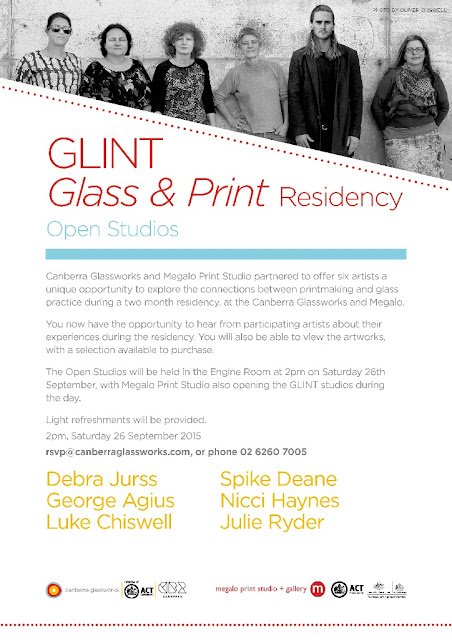 So, as you can see, it has been quite a while between posts, which can only mean one thing in my experience....complete overload of making work and no time or energy left to sit on the computer. My apologies, but hopefully you will understand when you see how much work has been accomplished.

In my last post I left you with some tantalising images of work not yet sandblasted, a ready-made carafe and a small glass disc.  I exposed some images onto a photographic film and adhered them to the objects ready to take down to the sandblaster.  I was doubtful that the intricacy of the design would work but you can see here for yourself. The frosted parts are the sandblasted design on clear glass.

While we are on the subject of sandblasting, my digitally printed 'mega-slides' FINALLY arrived from the printers.  My project was to make some very large microscope slides as prototypes for new work.  This would give me an idea of how successful the digital printing looks onto a fully transparent medium, how my designs translate onto it and finally, what sandblasting would look like incorporated into the design.  So, here are a couple of 'slides' I had printed.  The plain background on the slide on the right is the one I aim to sandblast post-printing.
As a starting point for the design I used Dr Christine Cargill's SEM images of Phaeoceros spores, together with some artwork I made for textiles from the Generate exhibition about Charles Darwin. I chose these images to see how well the details reproduced and to get something very quickly to the printers....luckily, because they took 4 weeks to arrive back...not speedy enough when you've only got a 6 week residency, but at least now I know the timeline for getting glass printed. And below is the image that I have sandblasted carefully after the printing.  I think it looks fantastic and is definitely the way I will be pursuing the new work in the future.
The concept was inspired by antique Victorian glass microscope slides, which were beautifully decorated with intricately designed papers. If you are in Canberra tomorrow, do come to see the slides in person, they are great (and I am not biased...haha!)

Apart from the digital printing and sandblasting, I was also inducted into the Cold-working area to enable me to finish off my pieces once they had been cast, blown or fused.  I had a mentor, Peter Nilsson, who is a terrific teacher and has a keen eye for scratches, irregularities and symmetry.  His work is also fantastic, so intricate and imaginative with enormous attention to detail.  You can see his work here - he is a specialist in engraving and coldworking.

I was also industrious in the mould room with Spike in the last week of GLINT, frantically trying to get as many of my projects realised as possible...just another case of too many ideas paired with the excitement of working in a new medium.  So once I had a full fleet of icebergs ... actually I am not sure what the collective of icebergs is...and quickly looking on Wikipedia it is either a crush or a drift.....neither of which aptly describe my majestic crystal blobs. As I was saying, I started the other casting project I was looking forward to and that was lost wax casting some seed pods I had made years ago with Geoff Farquhar in a silicon mould-making course. Once the mould is made around the wax forms, the moulds are taken to the kiln and placed upright so that the wax melts out of the cavity overnight and you are just left with the plaster mould. The mould is now ready to go into the casting kiln.  Crystal is weighed out for the total volume needed for all four seeds, but because each opening is small, and the crystal pieces are large, we put all the glass into a terracotta flowerpot so that the glass melts and runs down the hole and into each of the 4 openings for the seeds. So on the final day of GLINT I picked up my cast seeds ( it took 5 days in the kiln.....) and I have been so busy I have not even had time to divest them yet!! so if you are coming to the opening tomorrow I may just have done them....

OK this is a long post, but bear with me because it is about 4 weeks worth! The final images I want to share with you are some finished pieces that involve the glass printing, fusing and slumping to make some cute plates bowls and maybe even wall plaques.

So, that wraps it up for the GLINT residency, but I haven't finished my work at the CGW just yet!! Lots of cold-working and sandblasting to do, and lots more ideas to work through.  A few of us are keen to get our steps to induction in a few other areas, so we will be in and out of the Glassworks for some time to come. Once again, I would like to take this opportunity to thank the CICF for enabling me to fully enjoy the GLINT residency and to try out new materials and techniques - and thanks also to the Canberra Glassworks and Megalo Print Studios for organising such a wonderful project.
Last of all, but not least....to all my fellow GLINTies....you guys ROCK! Hope we catch up in the future and perhaps there will be a group exhibition further down the track.