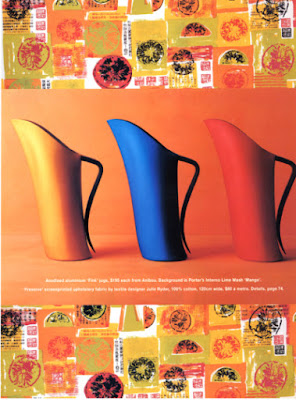 The Canberra arts community was shocked and saddened to learn of the tragic death of iconic designer, Robert Foster, yesterday. Rob was a huge figure in the national and international art scene, and many will recognise, and even own, one of the jugs that catapaulted his design business. The picture above was in an issue of Vogue in the early 90's and shows my 'Preserve' fabric bordering a photo of Rob's new jugs at the time. Little did I know that I would be moving to Canberra and having a lot more to do with Robert through ANCA and Craft ACT way back then.

Robert mentored many emerging Canberra artists, and was instrumental in helping launch their careers. He also collaborated with other artists and designers, creating new products into the F!NK range. He will be sorely missed and his passing has left a gaping hole in the heart of the Canberra and Queanbeyan communities. My sincere condolences to his family and friends. Vale Robert.
Posted by Julie at 09:34