Phycologia Australica in the NMA Library

After researching the early collection of seaweeds in Australia and overseas, and actually venturing out to collect and press seaweeds myself (I will write new post about this soon), I finally requested to view the five volumes of William Henry Harvey's Phycologia Australica.

William Henry Harvey (1811-1866) was an eminent phycologist who wrote many books on the algae and bryophytes of Britain, America and South Africa.  He first described Australian algae that were sent to him by Joseph Hooker, in Nereis Australis  (1847-1849) and later contributed to Hooker's Flora Tasmaniae (1860).  Harvey himself came to Australia in 1854, and spent just over a year collecting seaweeds and connecting up with other well-known collectors in many states such as Ferdinand Mueller, Ronald Gunn, George Bennett and William Archer. Whilst in Tasmania, for example, he stayed with the Reverend Fereday and his wife, Susan Fereday.  I have been following the Feredays (especially Susan) for a few months as part of my research into 19th century women botanical collectors. I will write more about this research in a later post....time to get back to Harvey. Harvey has dedicated each volume of Phycologia Australica, to collectors who showed him hospitality and whom he respected as a collector, and their knowledge of the habitats of Australian algae. I was delighted to find that Volume 4 was dedicated to the Feredays. In addition, Harvey named two seaweeds after them, including this one below. 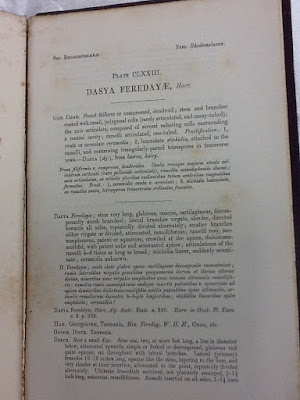 In the accompanying text, Harvey writes "This species is named in compliment to Mrs Fereday, of Georgetown, in whose collection I first saw some fine specimens. Subsequently I collected it in considerable plenty in the Tamar, above Georgetown, where it is occasionally drifted ashore in large quantity."

Similarly, he has also named this species of Haliseris after Ferdinand Mueller 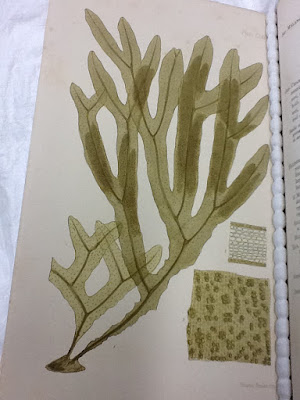 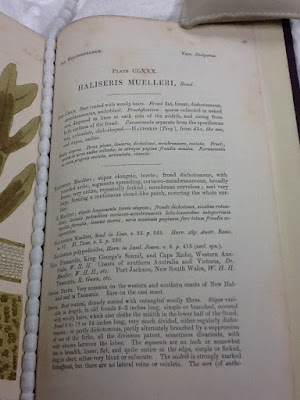 The five volumes contain beautifully drawn images that were printed using lithographic techniques by Harvey himself, and here are a few more illustrations to whet your appetite.

The delicate Halymenia above was collected by Harvey himself and named after George Clifton, a noted collector who was of great assistance to Harvey when he was in Australia. Harvey writes "To George Clifton, Esq., R.N., of Fremantle, Western Australia, whose name occurs so frequently throughout the volume and in the synopsis, I am indebted for some thousands of beautifully preserved specimens, including many species collected by no one else. His contributions commenced in 1854, whilst I was resident in Western Australia, and have been regularly continued at short intervals up to the present time (Sept., .1863). Three new genera, Cliftonaea, Bindera, and Encyothalia, besides many new species, prove the zeal and success with which Mr. Clifton has conducted his researches."

The five volumes of Phycologia Australica are very fragile and I could only gimpse at a section or two of Volume One which was handled by Naomi, one of the lovely librarians at the NMA. There are special bean-bag type pillows for resting the books in, a beaded weight that holds the spine of the book firm, and gorgeous tiny suede weights for holding pages down.  it was such a challenge at times to manipulate the book with respect and to try and photograph with my ipad that I only took photos of the plates that really caught my eye with regard to both aesthetics and information that was important to my research.

Happy to hear some comments if you have had the pleasure of viewing these books firsthand.