Time in Belfast was spent at the Ulster Museum repository looking at 19th century seaweed albums, including those connected to Charles Morrison (see previous posts!) Although I was staying one minute's walk away from the Museum, all their albums are housed in a secure facility many miles away. Luckily I had a lovely curator to look after me who drove me there each day and facilitated my access.

This is the album I came to see at the Ulster Museum, so it was an emotional moment for me, having discovered a lot through reading about it only through published papers. 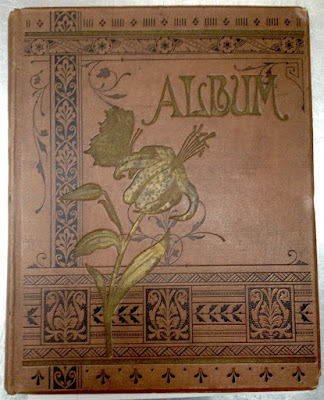 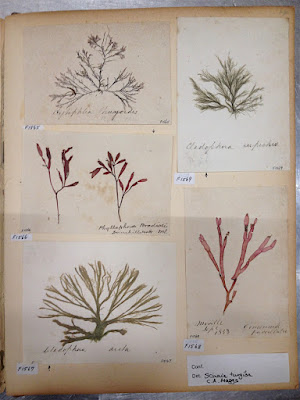 After my research at the Ulster Museum, I left Belfast and drove north to each and every known site that Charles Morrison had collected the seaweeds he put in his many albums.....the Giant's Causeway, Portrush, Moville, Greencastle to name a few.

Not only did I follow in Charles' footsteps along the wide beaches, rocky shorelines and isolated promontories, I also collected seaweed samples myself from each place so that I could have my own contemporary collection that mirrored his. Except not as prolific...!

Charles Morrison also collected along several sites along Lough Foyle, so I spent a few days at Derry-Londonderry (the 'PC' version of Derry....one radio announcer also coined the popular term "Slash City"). I was delighted to walk along one of the streets which incorporated this street art of  lovely marine pavers. One side of Lough Foyle is in County Derry, the other is in County Donegal.

He also collected at Lough Swilly, also in Co. Donegal. One of the most spectacular beaches I have seen on my travels was near Portsalon, on the far north coast of Lough Swilly. It was a really rough and winding road to drive down, and up, as the roads were so narrow.  Added to this was the temperature - over 30 degrees, something Irish roads are not used to.  The very bitumen was melting as we drove along, sticking to our tyres and also our shoes! But it was worth it in the end to walk on this beautiful and relatively deserted beach near Ballymastocker Bay.
Back home now but still processing photos and seaweed for further posts....and getting data together for my research.