Counting down the days

Only two weeks left of my three-month residency, so I have my head down in the studio from early in the morning till late at night in a quiet frenzy to get as much done as possible before I leave. Like most artists and makers, there is never "an end" point.......you just keep making until time or materials run out, or both. Not only am I making work for my upcoming solo exhibition at Narek Galleries in late November, I am also producing work relevant to Rimbun Dahan. In between long periods of sitting still  and stitching, I escape out into the garden to check out what is happening, absorb as much as I can in the time left, and if its not pouring with rain I will swim some laps in the pool to loosen up my neck and shoulder muscles.

When I got back from Pulau Pinang last week I noticed that the fish pond was undergoing renovations again, so it was a chance to get up close and personal to the gorgeous pink and white waterlilies starting to flower.
And on my way to lunch at the Wayung on Monday I spied these flamboyant Sterculia seed pods on the driveway. I photographed them in situ and took them back to the studio to draw the next day.  However......the next day the black seeds were missing..........sound familiar???? I have read that squirrels like them a lot, and we do have cheeky squirrels that run up the tree next to the studio every morning. Or, it could be another type of culprit......

If you read the blog a couple of months ago you will notice the similarity between these pods and the photo of the tropical chestnuts (Scaphium sp.) I posted - they both belong to the mallow family.
I feel like I am walking around trying to absorb as much of Rimbun Dahan as I can before I leave. In fact, lucky it was raining on Saturday afternoon because I shed a few tears walking home after lunching at the Warung Seleria Ria. I don't think I have ever eaten at one place so consistently before in my life . I don't even have to order any more - they know my name, what I like to drink, where I like to sit and how much rice (setengah!) I like with nasi campur. When they are closed I eat at Shima Restoran just a bit further up the road, or cook for myself, but I try to avoid that if possible!

Still, wandering up the driveway with tears in my eyes did not blind me to this magnificent piece of architecture high above my head......
This amazing structure is a huge hornet's nest.  I am sorry I could not get any closer to photograph it, but I had just been reading about the recent deaths from killer wasps in China........and then to come back to Rimbun Dahan and find this!  So for the last two days I have been investigating it with my camera, computer and binoculars to ascertain the species.  After hours on the internet and back and forth to the nest I narrowed it down between Vespa affinis (Lesser Banded hornet)  and Vespa tropica (Greater Banded hornet).
I persuaded two visiting musicians to help with identification using the binoculars and all three of us decided that these industrious homemakers are probably Vespa affinis  because it seemed that the yellow banding was in the first two abdominal segments rather than middle.  It was kind of hard to tell really because they kept flying in and out of the nest and we were all a little wary of them coming too close to us!

balé,  the open-sided studio on the mezzanine above mine, so I have been privy to the intricate processes involved in taking the instruments apart, washing them, sanding and hammering various parts, tuning them and re-positioning them for the last four days.
I. Komang Sudirga is a talented Balinese musician and composer who kindly gave me a quick overview of the instruments in the ensemble and what was involved in re-tuning them.  Although I am not a musician I was fascinated by the process of aural transformation that occurred from the industrial banging, power-sanding and hammering to the shimmering and exotic tones of gamelan. If you have not experienced the sound of gamelan you can click here to hear a group in Bali rehearsing, very informal and laid back.

I. Wayan Pager is a very well-known and respected gamelan maker who travels extensively to tune gamelan, and you can read more about him here  - be sure to read the full story. He owns the  Sidha Karya Gong Foundary in Blahbatuh in Bali which has had this review on Trip Advisor.


If you start to research gamelan over the internet you are bound to run into the name of Mantle Hood a pioneer ethnomusicologist in the field of gamelan. His son, Dr Made Mantle Hood, is also a lecturer in ethnomusicology and Indonesian studies, previously at Melbourne Conservatorium of Music but now based at Universiti Putra Malaysia, and made a visit to Komang and Wayan at Rimbun Dahan yesterday.

Our musicians have had to contend with a bit of competition though, which is probably why they tune in the daytime.  I managed to photograph one of the vocalists as it hopped through the studio last night. 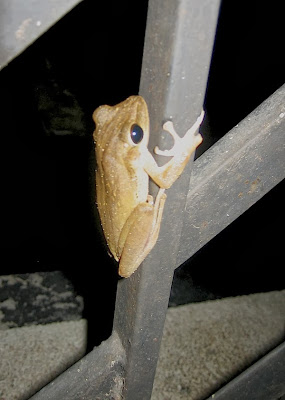 Cute, but no, I didn't have time to research frogs as well as hornets and gamelan!! So it remains in cognito!

And speaking of agile and graceful movements, I have yet to introduce the other two Asialink residents here for three months, Caitlin Mackenzie and Gabe Comerford.

They are two young dancers and choreographers based in Brisbane, although Caitlin grew up in Canberra. They are keeping a blog of their residency as well, so those of you interested in what they are doing click here.

Now, despite my first paragraph I know you are thinking where are images of the work I profess to be making.  Well, believe me I have been sewing up a storm, but with my exhibition opening in about 6 weeks I do not want to put up images of the work just yet, I would like to save them for the opening.  There will be a forthcoming article about the exhibition in the upcoming December issue of  Textile Fibre Forum and I will be at tutor  at the Geelong Forum in September 2014, which is also on the website.

I will share with you a book Angela has loaned me (to add to the 1.2 metres of books already piled on my apartment floor to read...!) and which I promptly ordered online. It is "Interwoven Globe: The Worldwide Textile Trade 1500-1800" and it accompanies an eponymous exhibition at the Metropolitan Museum of Art.

I have already read the chapter on the trade in natural dyes, but the beauty is all the work in this exhibition is naturally dyed, because it is all pre-1856. I love the cloth cover on the catalogue and just wish I could get over to New York to see the exhibition and the public programs.  Alas, too much to do back in Australia.