Conscious that my residency time is quickly disappearing, I took time out this week to visit Pulau Pinang (Penang Island) for a couple of days.  When I applied for a residency through Asialink last year there were two options for arts residencies in Malaysia - Rimbun Dahan and Hotel Penaga.  Both of these residencies are run by the owners of Rimbun Dahan, but obviously are very different from each other in location, facilities and environment. My project was geared very much towards the Rimbun Dahan residency, which I fortunately received, but I was still keen to see what the other studio and accommodation entailed. I stayed at the wonderful Hotel Penaga, and was really made to feel welcome by the friendly staff.  As a textile designer I also appreciated the effort that had gone into selecting the original paintings, old maps, eclectic furniture in the rooms and decorative tiling in the luxurious bathroom...I almost didn't want to leave! 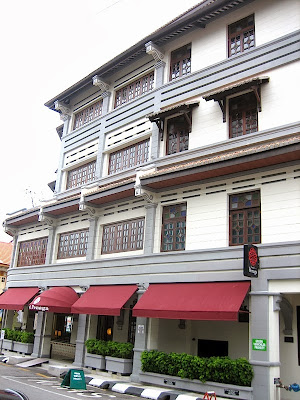 This year there is also another residency available in Penang - Cherrycake Studios.  Tim Craker has also been a Rimbun Dahan artist in residence -  he was a delight to meet in person, an hospitable host, and I also spied his distinctive artwork around George Town.
Penang lies off the northwest coast of Malaysia and has a fascinating history.  Those of you who have been following the blog will know I have been dyeing fabrics with the Areca nut, which comes from the Pinang Palm, after which the island is named.  However, it had also been briefly called Prince of Wales Island (after King George III) in the mid-18th century by Francis Light, although this name never caught on.
In order to get a handle on the history and architecture of Penang I took a wonderful walking tour with Joann Khaw, a UNESCO Cultural Heritage Specialist Guide. Her knowledge and passion about Penang Heritage architecture, the importance of feng shui in building concepts and interior architecture and fittings, as well as her great sense of humour enabled me to appreciate the differences in shophouse styles from 1790 - 1970's, and why Penang is now UNESCO listed. I also took Joann's tour of the Cheong Fatt Tze Mansion (also known as the Blue Mansion) where this enterprising Chinese housed his 8 wives and their children as well as his business.
Joann gave such a comprehensive tour of the layout of this house that when I visited the Peranakan Museum Mansion I could pay more attention to details and objects of the era, such as the wall frescos and belongings of the past inhabitants, the Babas and Nyonyas, or Straits Chinese.

Chinese women were expected to embroider a pair of beaded shoes for their prospective mother-in-law as part of their dowry, as well as other accomplishments.

The area around Lebuh Armenian has become famous for its street art, in particular the paintings by Ernest Zacharevic.  The wet season in Penang did not allow me to get around to see every one of them but there is a very informative brochure about the street art in Penang available as a guide.
It was also hard to get a clear photograph due to the hoards of tourists taking their photos with the art.

My stay in Penang coincided with the opening of the new Batik Painting Museum (website currently under construction) at 19 Armenian Street. This Museum focuses on batik as a fine art, rather than as surface design for textiles, and has many paintings by the renowned Dato Cheah Thean Teng as well as other artists such as Khalil Ibrahim, as well as fantastic batik by Ismail Mat Hussin, Chuah Seon Keng and Ida Hadjar.
The Museum is spread over three floors and still needs some finishing touches such as labelling all the exhibits, but it was a great cross-section of batik as fine art.
Joann also took me to an amazing shop that has sold pigments, paints and dyes for generations, Lim Teck Lee. You would not guess the treasures that lay behind the smoked glass facade of their office, and I would never have found it by myself. Thanks Joann!

Penang also has a lovely eclectic mix of old and new, with bowerbird-type gift shops springing up around Lebuh Cina, such as Gallery 29 owned by a Malaysian textile designer, Rebecca Duckett. She and her husband also own the renowned Tropical Spice Garden, which is a must on the Penang agenda. In colonial times Penang built its wealth on its trade in spices - mace, nutmeg, cinnamon, pepper, betel nut from the Pinang Palm - opium, tin and rice. The Tropical Spice Garden is an aromatic way to absorb this history, and they offer cooking classes too! Here is something I have eaten a lot of in kuih  (cakes) since being in Malaysia but had no idea what it looked like - the Pandan plant.

Which brings me to one of the most important tourist attractions of Pulau Pinang....FOOD! So many choices and so few mealtimes!! From Char Kway Teow, to Penang Laksa; roti canai to mee goreng, nonya cuisine, satay, cendol.....it is overwhelming and a task in itself to find "the best"....everyone you ask has a different opinion of where to find the best food in Penang.  I will not leave you in the lurch though.  My favourite eating place turned out to be Tek Sen in Labuh Carnavon.  It was so good I ate lunch AND dinner there in one day (if only it was open for breakfast too!). One of the dishes on their menu I have since cooked myself are stir-fried winged beans, so crunchy and great to look at too. Known in Malay as kacang botol, these beans are high in protein and vitamins and all parts of the plant are edible, from the seeds to the pods, leaves and flowers.
And to round off my amazing time in Penang, what better way than to unwind with a bit of late-night Jazz at the China House in Lebuh Cina, with the smooth sounds of the Northern Jazz Unit accompanied by the sultry vocals of Vivien Adram.
On that soulful note,
sehingga minggu depan
Julie