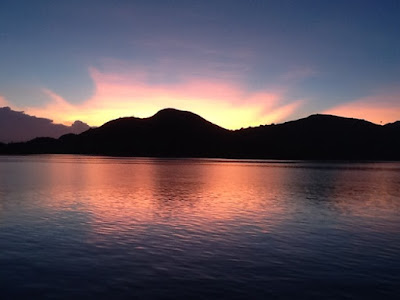 Another beautiful sunrise on the way to Rinca island, and all the more poignant because this is our last day on the Ombak Putih. Rinca is one of the four islands that are home to the prehistoric Komodo Dragons, and it lies within the Komodo National Park. 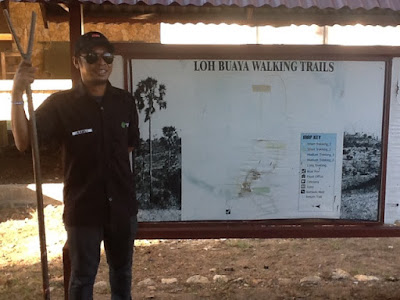 We were guided by Kamli who comes from Rinca. Although the guides live on site when they are working Kamli said that sometimes it takes him 6 hours to get to his village when he is going home because of the danger involved. Not only are there Komodo dragons, there are snakes, wild deer and buffalo to contend with. He sometimes has to run up a tree to sit out the danger. Although, having said that, baby Komodo dragons live in trees for the first couple of years after hatching, and they are not that small..... 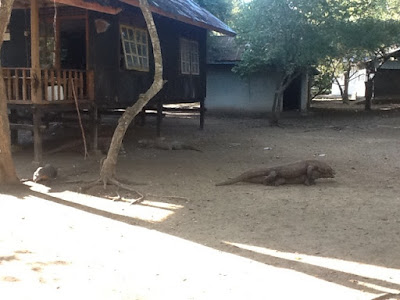 Most of my photos were taken on my camera because of the lighting conditions - so the ones taken on my ipad were not so good. This is OK  in terms of lighting, however it is of a 'romantic' nature. I guess we were lucky to see that.....at least they weren't eyeing us off  instead. Although the Komodo look sluggish they can actually run up to 60 km/h and thats a whole lot faster than me! Their bites are toxic and contain Listeria bacteria, so they are really to be avoided. They immobilise their prey and then tear off chunks and swallow whole, no chewing. Their jaws can dislocate to enable them to swallow whole animals. The park is littered with skulls of buffalo and other victims. 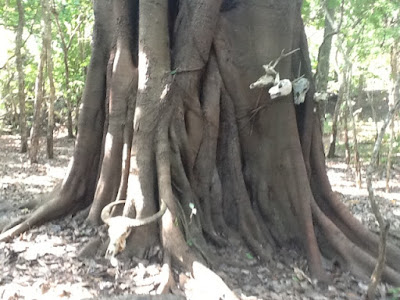 The terrain of Rinca was quite different to other islands we have been on and I was quite nervous walking along, making sure I kept up with the group.  Even so, I walked loudly and carried a big stick.... 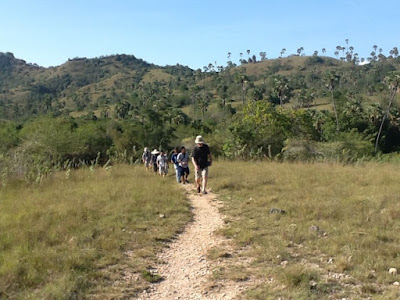 After our visit to ghe Komodo, we continued sailing towards Labuan Bajo to catch our afternoon flight back to Bali. The crew decided to put up all the sails, which was a spectacular sight. 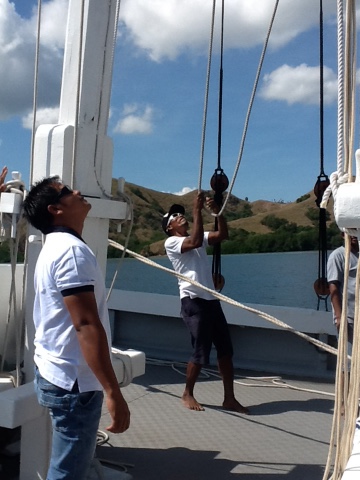 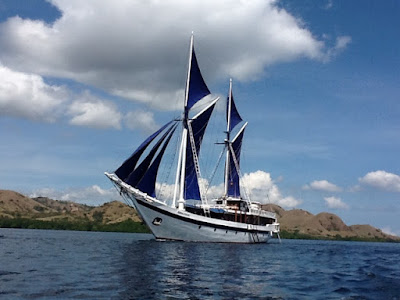 We then went ashore to a small sandy beach and had our last swim and snorkle. It was perfect....except for those parrot fish who wanted to nip you every so often!

This trip has been an amazing adventure and I have learnt so much about Indonesian textiles from remote islands, their cultures and their dyes. It was truly an honour to be guided through the process by David and Sue, whose knowledge, love and passion for not only the textiles but the people, is immense. They were generous to a fault and it is hard to imagine, in fact impossible to imagine trying to do a similar trip by yourself. Their personal connections with local guides and weavers and dyers on these islands is testament to their committment to help these people continue to produce  and practice their textile art in a sustainable way. The wonderful thing about this trip was also the other passengers, who all came with their knowledge and expertise, and not always in textiles. It made for lively and stimulating conversations over delicious meals and bumpy car rides and our friendships formed bonds that I hope will act as warps and wefts for future interaction.
What a great trip this has been, I am so greatful to Sue and David and all the crew of Seatrek for making it such a memorable and informative one!