This morning we moored at Waingapu and were met again by local guide and textile workshop owner, Freddy. We were driven in several cars to his workshop where they produce beautiful ikat for hinggi and lawu. All the designs and ikat tying are done in-house, as is the morinda dyeing and weaving. The indigo is outsourced to specialised artisans. 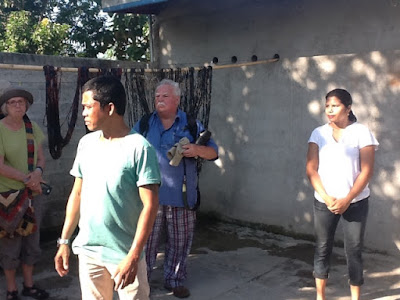 This is Freddy and his wife at the entrance to his workshop with Davidin the background. 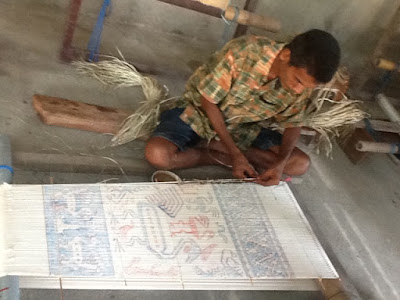 Freddy explained how designs are laid out, then drawn up using  blue and red pencils. The master ikat artist then starts to tie each section using a long knot and thread for the morinda ties, and a shorter thread for the indigo. It is painstaking and exacting work which can take months to complete a single piece. 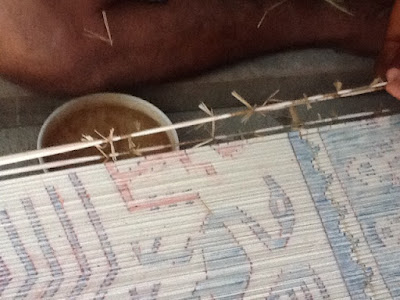 Many of the staff have been with Freddy since he started his workshop about 15 years ago, and there is careful attention to detail so that each ikat is as sharp and precise as possible because they use only 6 threads per bundle instead of the usual 12 threads per bundle. 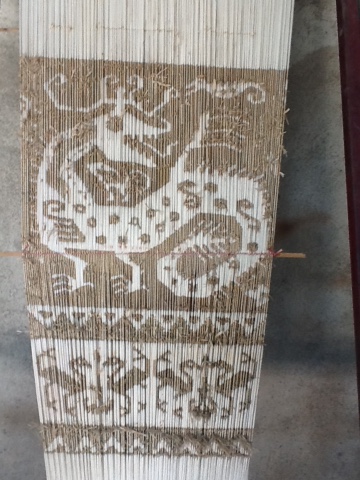 A section of tied ikat before dyeing. 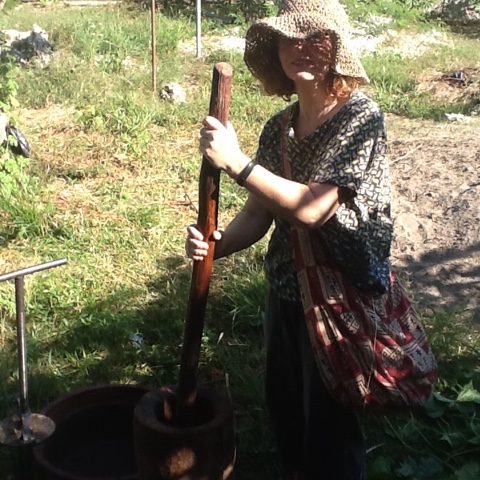 I thought they might need a hand pounding the morinda roots before dyeing..... 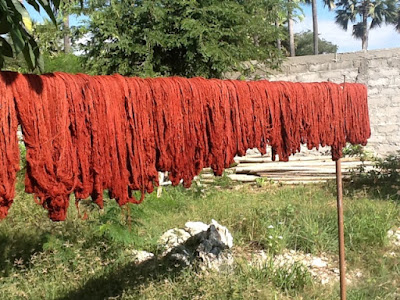 Once the first layer of indigo has been dyed, the tied warp is soaked in water to get rid of the ash and then it is soaked in a candlenut mordant for 2 days to ensure the cotton soaks up as much as possible. The warp is then left out to hang for 3 months so that the fatty acids stick to the indigo and mordant the fabric for the morinda dyeing. Freddy's workshop dyes the warp in the morinda twice to ensure full colour penetration. 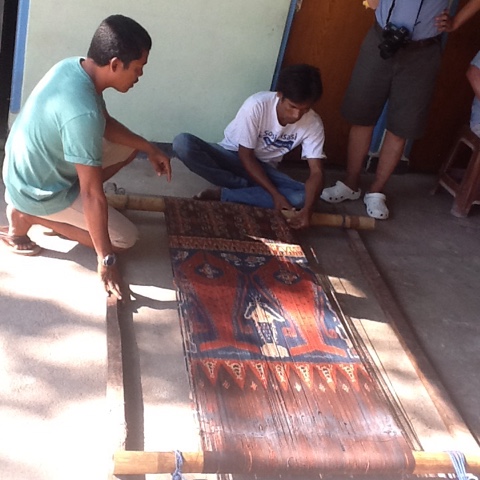 Once the warp has been fully dyed, the threads are focussed by an expert ikat maker, to ensure they have retained tension to provide the sharpest detail possible. They can then be woven by the two weavers there.

Another detailing on these fabrics is the kabokil. This border is woven once the fabric has been cut from the loom. The excess warp threads are turned to the side and are rewoven as the weft to make a decorative striped border at the top and bottom of the fabric. 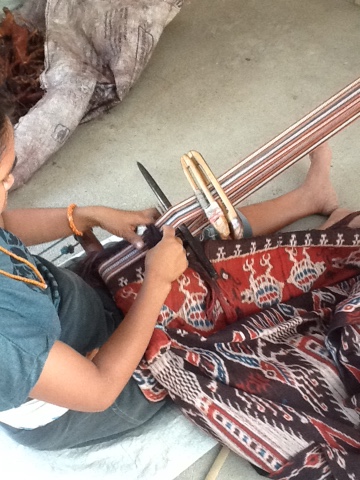 We can now start to realise why these textiles take such a long time to produce and how complex the whole process is. It is only once you understand how many skills are involved in making one piece of cloth that you realise why prices deserve to be high for such quality. 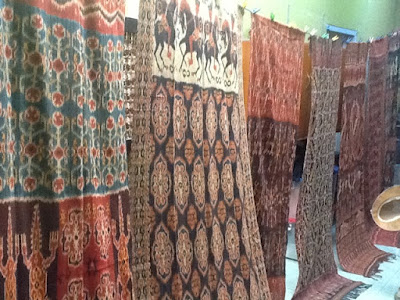 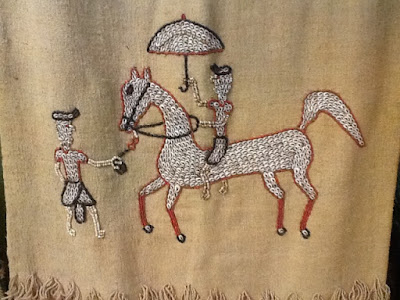 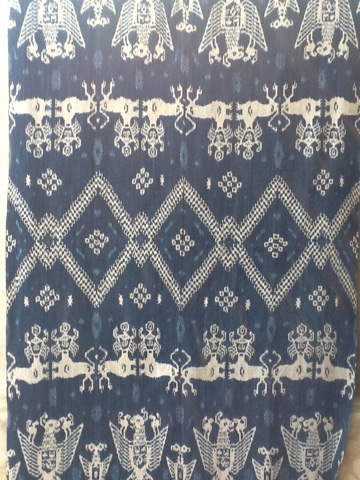 Some of the many beautiful cloths for sale in Freddy's gallery.

From Freddy's workshop we took a short stroll to the neighbouring royal village of Prailiu, where many textiles, jewellery and carved goods were offered for sale. It was amusing to see the same people we saw yesterday at another harbour, and they continued to follow our every move at each stop we made, even trying to bargain with us as we pulled anchor and sailed away! 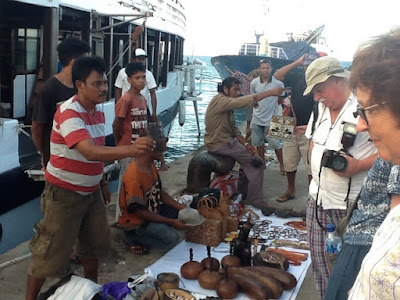 After lunch we went to  a rarely visited village where we were welcomed by ikat clad warriors on horseback. It was pretty wild and raw, and we were warned not get close to the horses as they were not well behaved. The whole village turned out for a welcome ceremony, and it was really quite different from what we had experienced before - the crowd was very vocal and boisterous and I was dreading the final dance where, as usual, we were invited to join in. It was all OK however, no complicated steps and perhaps by then the effects of chewing betel had sunk in. 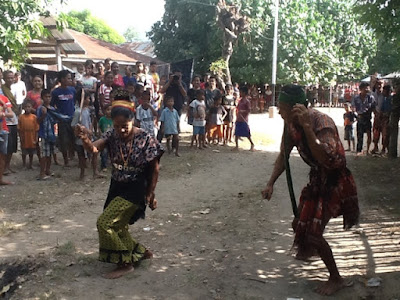 We were also invited into a house which contained the bodies of two deceased family members - one was recent, and the other had been there for 15 years, just in the family living room. Because it was so dark I had to use my camera so will pist photos of this at a later date.
On our way back to the ship we stopped by a cathedral to see the statue of Christ dressed in Sumbanese ikat. 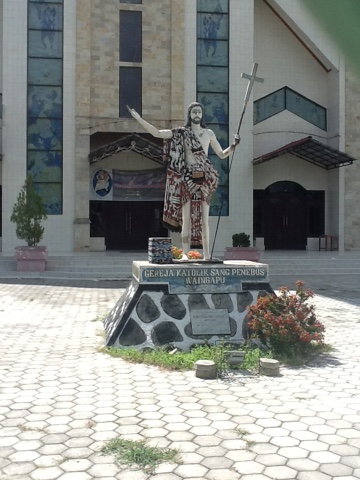 In the afternoon we set sail for the island of Rinca and in the evening it was a final night party with everyone dressing in the textiles they had bought along the way. Most of these textiles were woven to be worn, not as heirlooms, so it was not disrespectful for us to use them, in fact it was a celebration of the skills and talents of all the weavers and dyers we had seen over the past 13 days. 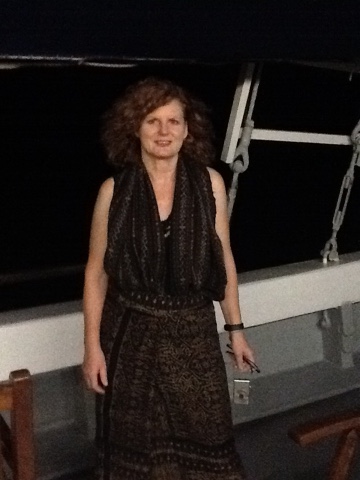 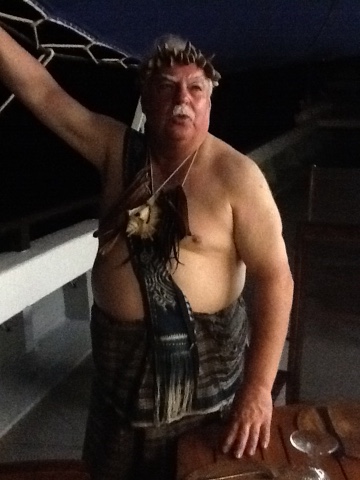 We all enjoyed drinks on the upper deck before gowing downstairs for a wonderful meal followed by traditional music from the crew. Still.......I was in bed by 9pm, getting some sleep before our last day on the boat and thinking about the Komodo Dragons to come....