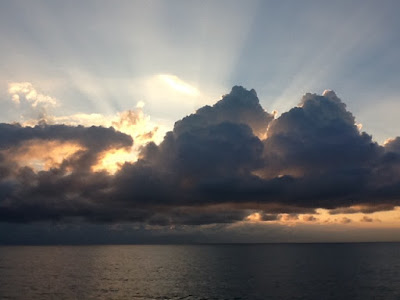 I woke up a bit later this morning and the sky was quite overcast, not much of a sunrise, but in retrospect this looks pretty spectacular. We were also joined by a pod of dolphins, lumba-lumba, to the side of the boat as we sailed towards the east coast of Sumba. We landed on the beach at Mololo and were driven by our local guide, Freddy, to the royal hamlet of Pau, where two Princesses live. 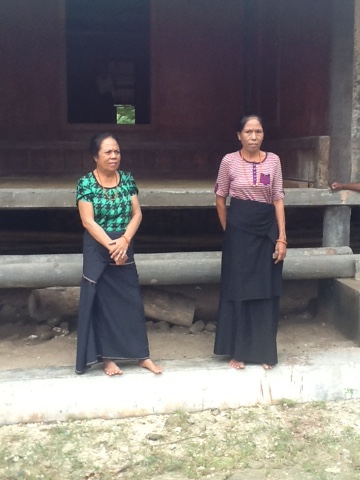 Most of the rice fields we saw on our way to Pau are owned by the King and are farmed by Suvanese slaves - yes slavery is still alive and well in Sumba and these slaves are known as papangan.  The two Princesses, Tamunambu Pakki and Tamunambu Tokung, are known for their very fine  pahikung weaving. This weaving is a supplementary warp technique which uses a white supplementary warp. The pattern defined with liddy sticks on a separate piece so that in effect the design is in front of them, like a cartoon, and the pattern is copied or transferred below. 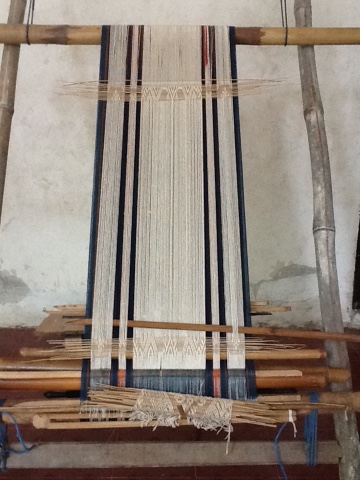 This piece has been warped up with the top white supplementary threads. You can see the bottom indigo layer below and the pattern with the liddy sticks. 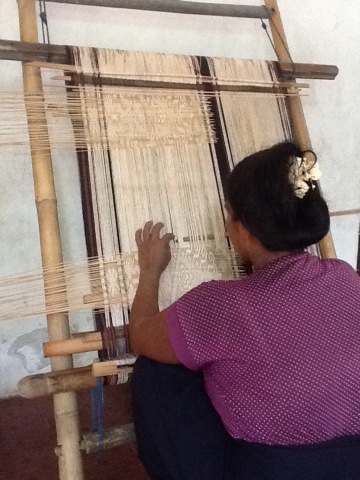 Here is another showing the weaving of the supplementary warp. The technique of ndatta is then employed, and this is the individual colouring of motifs or threads by using a brush, often a toothbrush, once it is woven. 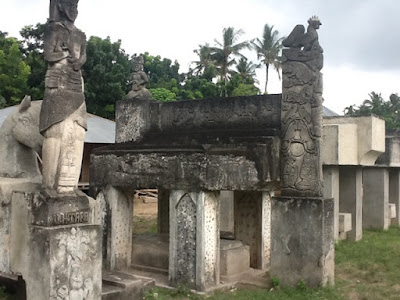 Both Pau and nearby Rende are royal hamlets and these tombs are an integral  and very important part of life. When an aristocrat dies, the body is placed in a foetal position and wrapped in his or her finest cloth. The body is then bound with a lot of other cloths, but these do not have to be important ones. The last cloth however must be another fine cloth. The body is put in a coffin and placed in the family, home for up to several years.....right near the kitchen....! Death is an accepted part of life, and by leaving a substantial amount of time between the death and the internment of the body allows the family plenty of time to raise funds for the funeral - the calculating of how many animals will be slaughtered, raising the funds, inviting relatives, organising accommodation etc. it is as far away from the Western idea of death and burial as chalk and cheese. Although the sacrifice of slaves when an aristocrat dies is prohibited there are stories about certain 'unfortunate accidents' that happen around these mausoleums involving the papangan that perhaps were helping to raise the large stone lids to inter the body of the deceased......
Overall we saw some gorgeous examples of woven cloths inside the Princesses house but this was done with little light and we were not allowed to take the cloths outside. It was all hush hush business so the people outside could not see what or if any cloths were being sold.
Rende was a similar village, slightly differently set up but with similar tombs and cloths. However, the Princess there wove some very fine baskets and showed us her collection. 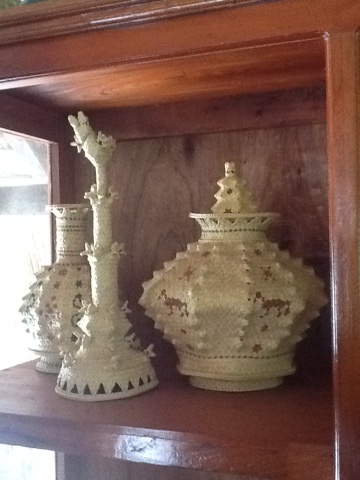 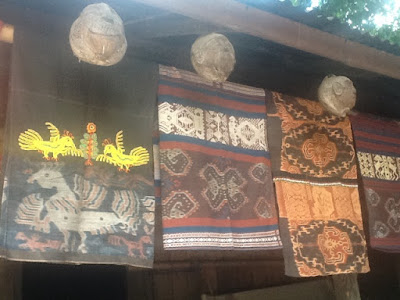 Some of the cloths for sale around the village, employing a variety of techniques including ndatta, pahikung, ikat, mud dyeing, beading and indigo. 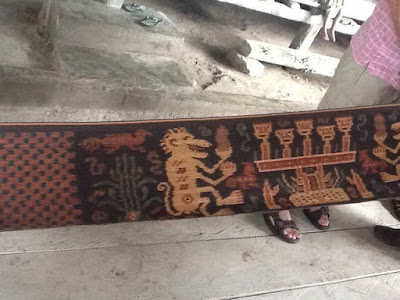 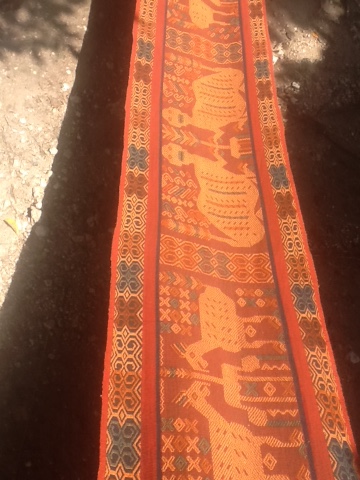 Two examples of Rohu Banggi, which are about 6-7m long. These were wrapped around the man's body to protect him like armour.
Textile production on Sumba is a cooperative venture - tasks are divided amongst villages for ikat tyeing, indigo dyeing, morinda dyeing and weaving. Most of the yarns we saw were commercially spun, and there were varieties in quality from those using commercial dyes, those using nautral dyes and those using a combination, especially with the ndatta cloths. It was also hard to tell whether the mud cloths were made with natural or synthetic dyes.
After a long hot day of looking at textiles we went ashore at night to have a wonderful beach barbeque that the staff of the Ombak Putih had prepared for us. Out on the dark beach, lit only by tea candles in the sand, we got to see a beautiful display of stars in the night sky with the Ombak Putih lit up and floating in the sea before us. Bliss.