I am a recent convert to Instagram (thanks to all my workshop students who have been nagging at me for years...!) and the full meaning of how it can bring like-minded people together hit home yesterday when I finally got to meet two people I have been following - Kerryann and John Fitzgerald from Atlantic Irish Seaweed. They operate out of a teeny tiny village called Caherdaniel on the wild Atlantic coastline, about 45 minutes from Cill Rialaig.

When I realised that they were close to Cill Rialaig whilst I was planning my trip, I immediately emailed John to see if I could attend one of their seaweed foraging workshops.  John explained that these workshops are ideally timed according to the best tides for seaweed collecting, so an exact date could not be scheduled until I got here.  Unfortunately, the tides were against me attending a regular workshop, but John had another idea in store for me....they had been approached by Tourism Ireland to showcase their locavore business and it just so happened that the film crew were coming to film while I was here. Would I be interested in participating??? You bet!

We met upstairs at The Blind Piper pub, and in true filming style, we started with the end of the seaweed story first - that is, we got to eat the fruits of our, or rather Kerryann's labour, before we went foraging. This was timed perfectly because it was lunchtime, and I was eager to try the dishes laid out before us.  By us I mean the four "tourists" for the day, so in me at least they had a bona fide model!

Kerryann had prepared an array of delicious looking foods using local ingredients as well as different kinds of local seaweeds. Her descriptions of each dish were mouthwatering in themselves but the hardest part was having to "pretend" to eat and enjoy for the camera, because of course we couldn't actually eat the food until the film crew were happy with the footage!

I can't recall all the types of seaweed or foods we ate eventually, but we had a sauerkraut, top left, local pork prosciutto with samphire, thin slices of pepper beef with seaweed spinach and wild garlic and a rich labne with a seaweed pesto, all artistically presented on an eclectic mix of vintage and contemporary plates. We also drank a kombucha made with pineapple and seaweed, and for desert some chocolate seaweed bonbons and a seaweed toffee brittle.

After we actually did eat the lunch (delicious!) we headed down to nearby Derrynane Beach, where John talked us through the procedures of collecting the various seaweeds, safety precautions, and identified at least half a dozen types that we had eaten for lunch.

In a normal workshop, John would give a lecture first and then forage later, but this was an unusual day, and everything we did was not done once or even twice but many times to get the actions just right to sync with each take. 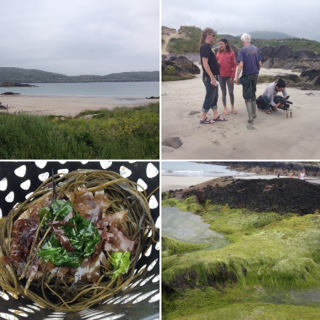 I certainly hope my acting skills were up to it, not that I needed to act because I was so interested in the identification of the seaweed and how to use it in everyday food. The health benefits of eating seaweed are enormous, and John had all the facts and figures off the top of his head, informing us about Vitamin B6, omegas and gut bacteria. Seaweeds were the very first vegetables humans ate and the precursors to all our land plants so it makes sense to include them back into our diet ....and they can be free if you collect in the right areas and prepare them correctly.

What a fantastic day and what a truly unique Irish experience for me - plus I got to meet my IG friends Kerryann and John. A day of laughter and banter was cemented over a few pints in Bridie's pub when we finally called it a wrap! If you are ever around Caherdaniel way I would recommend doing something completely Irish, local and authentic like the seaweed workshop because it is something you will remember long after each spectacular coastline and touristy destination becomes a distant memory.