When I first arrived at Cill Rialaig to start my two week residency, the islands and neighbouring headlands were mostly covered in mist, conjuring up the mythology of Hy-Brasil.  For the past week though, the view to the islands have all been exceptionally clear as we have had hot and mostly sunny days.  I have spent some time this week on Ballinskelligs beach, fossicking for seaweeds, sea glass and other flotsam and jetsam to put on the studio windowsill. 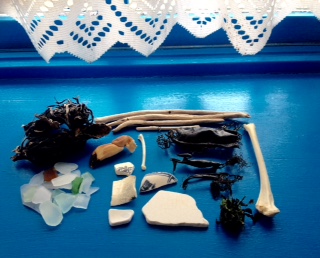 One of the interesting finds has been some egg cases from the Nursehound catshark.  Also known a 'mermaids purses' shark egg casings come in all shapes and sizes.  Most Australians will know the Port Jackson shark egg cases as being architecturally spiralled, like a giant ceiling or wall plug, but dark brown. These egg cases are beautifully adorned with long curly tendrils from each of the four corners. The Nursehound Catshark (Scyliorhinus stellaris) is near threatened in Ireland and the north-east Atlantic. Their eggs are laid amongst the seaweeds just under the low tide mark and take 9 months to hatch. Pity I can't bring these home with me....

Other finds have been a diverse array of seaweeds, including Himathalia elongate, often known as Sea Spaghetti or Thong Weed. It is delicious the way Kerryann from Atlantic Irish Seaweed prepares it with sesame oil and soy, but I was just eating it straight from the sea as well - it has a delightful crunchy nutty texture.
And of course, you can't come to Ireland without finding Irish moss, or Chondrus crispus, the source of carrageenan used extensively in the food, cosmetics and textile industry.

During my time at Cill Rialaig I have also connected with Alexis and Stephen from Fermoyle Pottery and Garden, just a few minutes out of Dun Geagan. They invited me to come to their studio to decorate a few ceramic platters and it was a great opportunity to try my surface design skills onto a new substrate. It also gave us time to play around with the seaweed I had collected and to experiment with some ideas that might go into production for them.

Alexis and Steve have a lovely house and extensive garden complete with a huge poly tunnel which enables them to grow vegetables all year round and try out plants that would not survive the harsh winters. The whole family hangs out there in the long summer nights and it also doubles up as a unique area for drying clothes when the weather is wet (which it hasn't been!). They keep chooks and guinea fowls and grow vegetables, fruits and herbs in an effort to be self-sustainable and to provide their kids with a knowledge of where their food comes from. The poly tunnel is the kids favourite place to hang out because that's where the strawberries and new peas are growing right now!

Stephen and Alexis are very encouraging and they are in the process of setting up a lovely Airbnb above their studio - perfect for a potter (hint hint) and are looking to collaborate with artists on a series of platters for a unique Artist range. They keep talking about what we will do the 'next time I come to Ballinskelligs'😊 and to be perfectly honest I can almost see that happening.....
For the time being it is a day to be finishing off work, as it is wild and windy, overcast and looking like rain outside.  I have to start packing and tomorrow I head off to Kinsale, Cork and Kilkenny.  Then next week I will be in Belfast at the Ulster Museum Herbarium ...stay tuned!