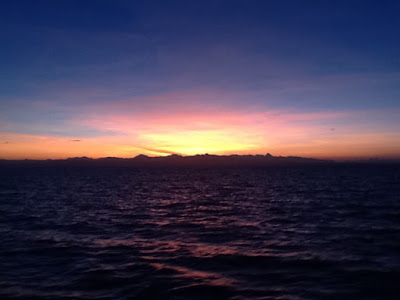 This photo was taken at 5.30 this morning as we approached the West coast of Timor after sailing overnight from Lamalera in Lambata. We disembarked at the old harbour where Captain Bligh landed in 1789 after the mutiny on the bounty, right out the front of Teddy's Bar. 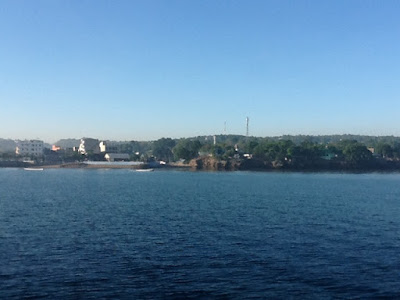 We were accompanied by local guide, Tony, for the day. Our first stop for the day was to visit the King of Amorosi..... 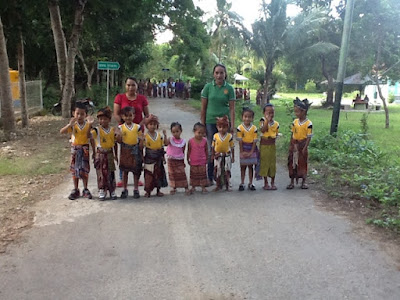 We were greeted by the children, some of whom were the King's grandchildren, who took our hands and guided us to the ceremonial welcome by elders, then onwards to the King's house ( I am not sure if that is called a palace in Amorosi).... 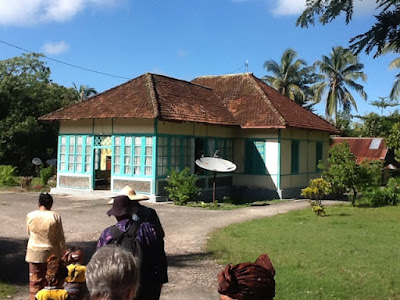 Again we were taken through the dyeing and weaving processes. To make  a dark black dye, the women dye firstly with indigo, then Morinda and then lumpur which is a mud, I guess iron-rich. They produce a purple from jati leaves and yellow comes from saffron or the skin of pomegranates and the bark. 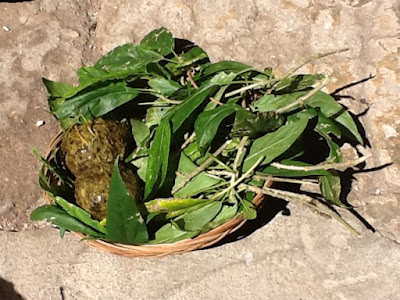 These are balls of candlenut mixed with daun uta runa and water ready for pre-mordanting for Morinda dyeing. 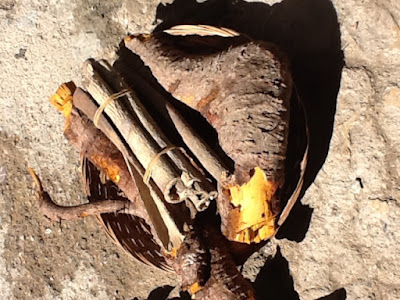 This is the Morinda root alongside Loba bark. 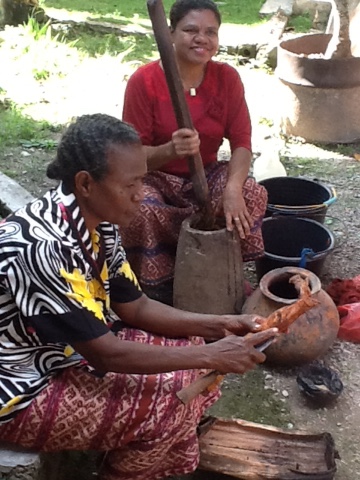 Preparing the Morinda and indigo dyestuffs. 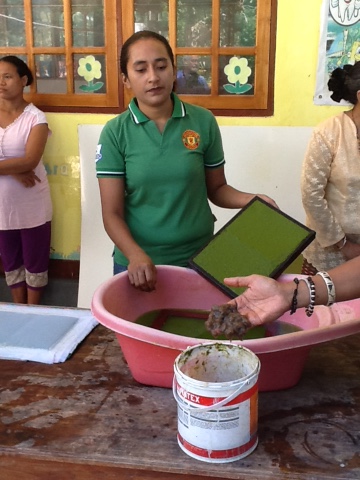 After watching the fabric dyeing we went to the papermaking studio where the King's 3rd daughter makes handmade paper from plants. There are 27 plants on the property she can use, but today she demonstrated making paper with the skin of the banana trunk and rumput gaja, a type of elephant grass. 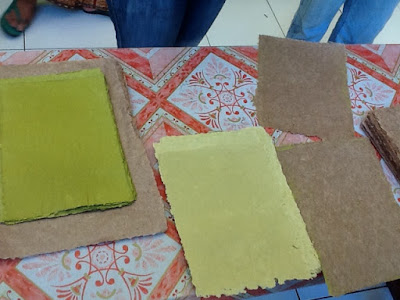 The King of Amorosi, Bapak Robert Koroh, is a well-known printmaker who has had exhibitions at Nomad Gallery and whose work is in the collection of the NGA.
Before returning to the Ombak Putih for lunch we went to the  Museum which was fairly modern and veiwed their collection of textiles on display, again behind glass, so photography was difficult. They also had a lovely collection of baskets and jewellery, tools and ceramics. 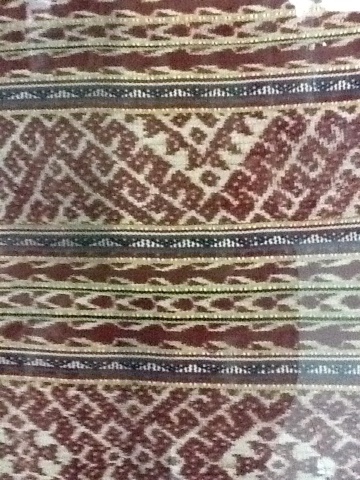 This is a detail of an Amarasi weaving using natural dyes ( Morinda and indigo). The decorative motif in this design is called the "Bao naki", often worn by aristocracy. 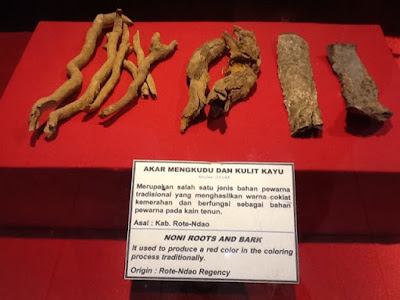 In the afternoon we had another natural dyeing demonstration which was excellent, and we learnt a bit more about pre-mordanting with the nitas tree, using the skin of the fruits and the leaves, as well as a few other plants. 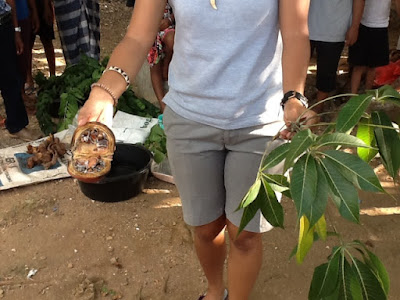 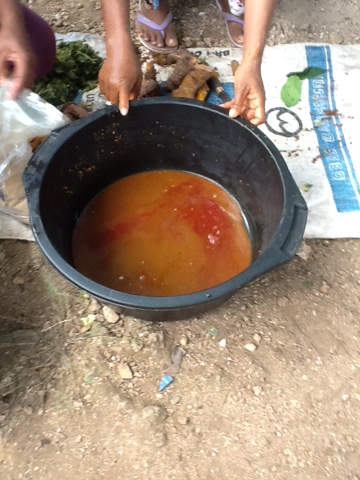 It was also the first time I saw them adding an alkaline water to the Morinda dye to effect the red colouring.

However some of the most charming things about going into a village is meeting the locals and I have just fallen in love with the young children who are so happy to connect with you, they are so cheeky and adorable! 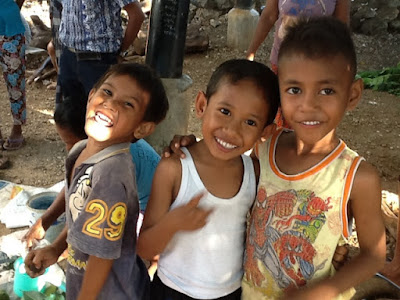 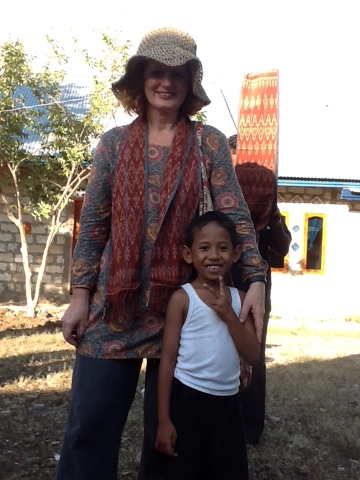 The weaving was also beautiful and many of us were laden with purchases, wondering how we are going to get them home ! 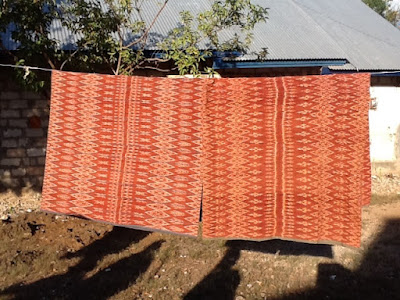 And of course the day ended with another beautiful sunset as we sailed towards Suva, our next destination. 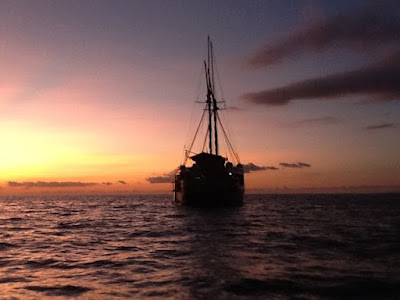