This morning was another glorious sunrise and after breakfast on the boat we went for an excursion to the Tapkala Village of the Abui Tribe. We were taken most of the way by bus but about half a kilometer or so we had to stop, get out and walk the rest of the way because it was difficult for the bus to negotiate. 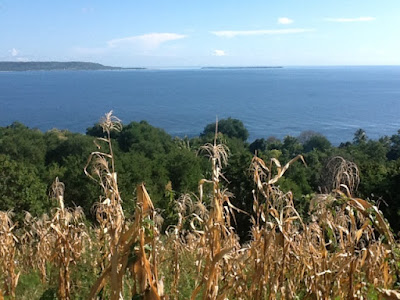 The people of Tapkala gave us a ceremonial greeting with warriors brandishing spears, and feathered headdresses, and the women wearing heavy ankle bracelets. These people are physically similar to Papuans and in fact recent recearch has identified 14 separate indigenous languages, most of which are Papuan or Austronesian. 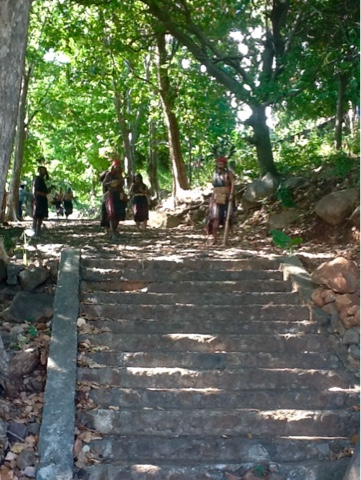 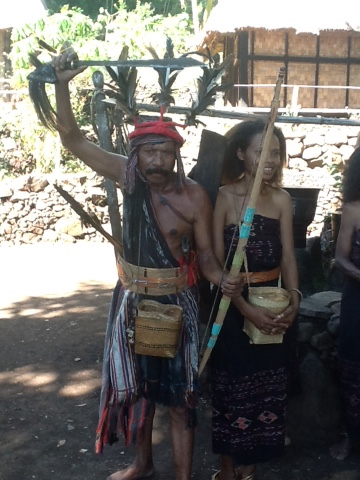 They invited us into their village and performed a once-sacred dance called the lego-lego , performed by joining hands in a circle, accompanied by very slow yet emotive singing. We were then invited to join in because it was a dance about friendship. 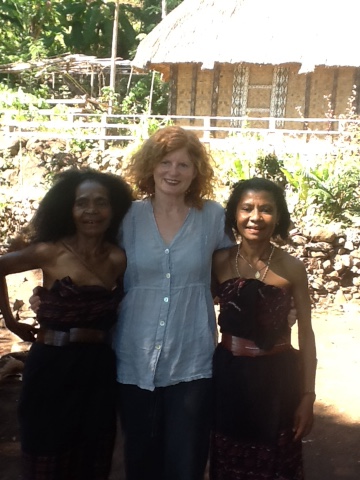 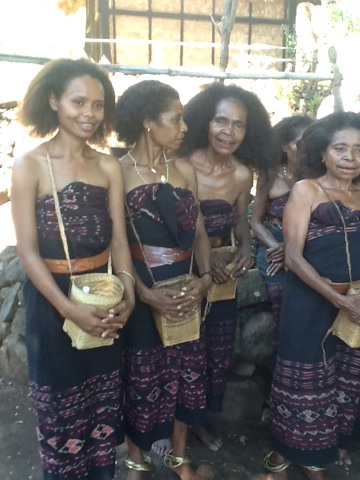 This tribe place a lot of value on the moko drums which are used as bridewealth. Their houses further down the mountain were also decorated with painted or woven geometric motifs. 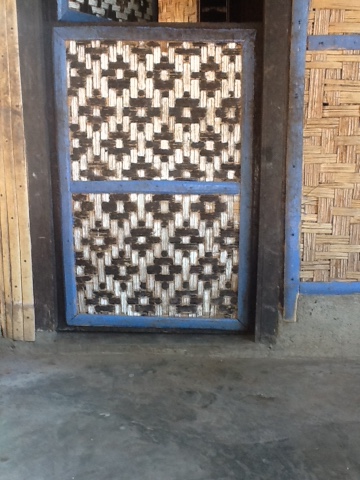 After that we were taken to a local market to browse amongst the vendors, mostly fruit and vegetables and western-style clothing, but there were a few stalls selling some handmade textiles. 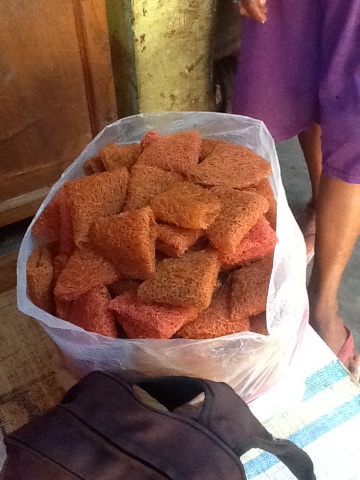 This was one of the delicious treats on offer - it is called kueh jipang and is made from rice flour, coconut and brown sugar, kind of like a coloured rice vermicelli, but sweet.
We then visited the local Museum which held a small assortment of commissioned textiles from different regions. These had been recently made and many of the exhibits were behind filthy tinted glass so photography was not that easy to do. 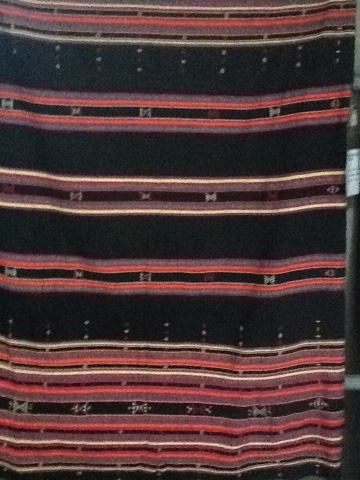 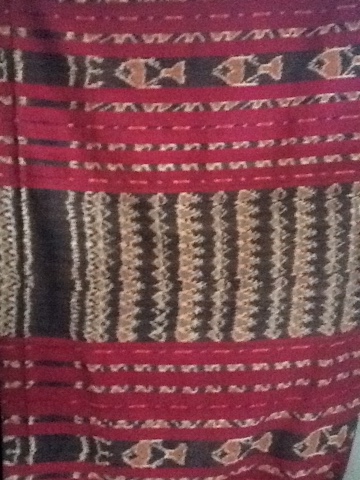 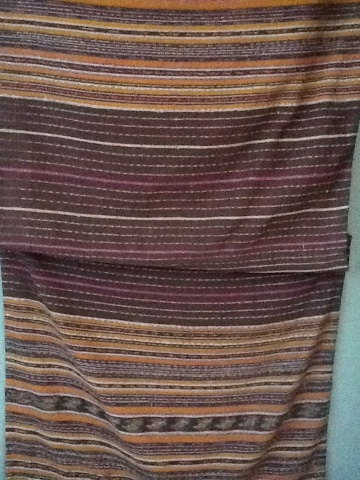 After lunch on the boat we went ashore again to visit the Monbang Hamlet in the Kopidil District, home to the Abui tribe. These people have revived the art of barkcloth making, because the use of bast fibres was banned in 1971 by the Indonesian government for being too primitive. 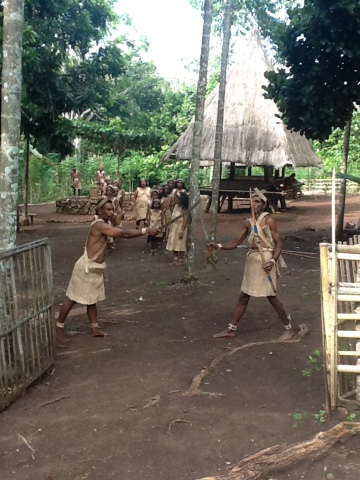 We caught the bus most of the way up the mountain but needed to walk the last 300m or so because
of a dispute between two tribes hence the bus was not allowed to go any further. 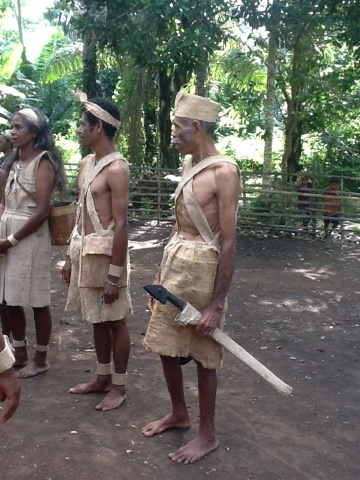 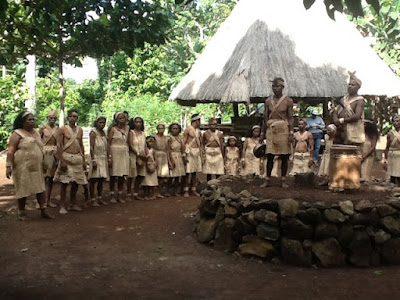 Our representative this time was Alfred from Taiwan and he was dressed ceremonially in the warrior's tapa cloth skirt and headdress. The Abui took him into the forest to "find" the tree that the tapa is made from, and he was carried seated on bamboo poles like a king to the central meeting space. 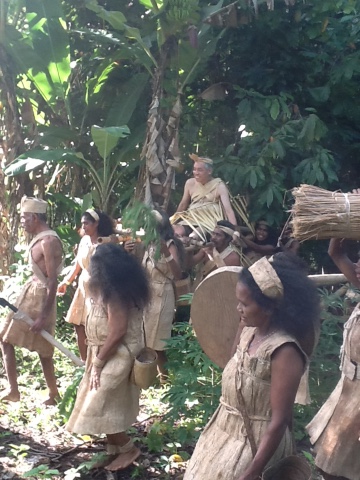 Another version of lego-lego was performed and then the demonstration of tapa making began. The tree they collected was thin, probably because they had a certain amount of time for demonstration as it is hard work. Firstly the outer bark was shaved off with a large knife. The peeled log is placed over another log for balance and then beaten carefully with another piece of wood. This bruised the outer layer of the tree so that it separated from the layers below. Once the whole circmference had been beaten the bark was peeled off then slit up the centre to form a squarish piece of tapa which could then be joined to other pieces to form larger cloth. Unfortunately I took videos of this process on the ipad, not photos, so I cant add any photos in until I return home.
In the evening we set sail for the island of Lamalera.