Another early rise this morning but this time I joined one of our other travellers, John, who conducts a yoga class each morning. It is slowly growing in size and there were about 6 of us all on the top deck while the sun rose in front of us as the boat set sail for Lembata.

This photo shows the Ile Api with its plume of smoke as the sun rose behind it. While we were doing yoga, a large pod of dolphins swam very close to the boat, unfortunately I couldn't take a photo because I was in warrior pose 1....! 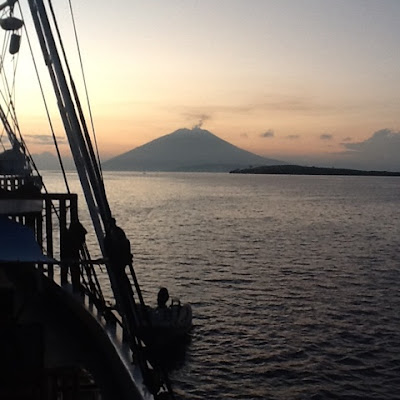 Our first stop after breakfast was the village of Mawa on the island of Lembata. This was a lovely village  that grows and spins it's own cotton and the predominant patterns are stripes in dark indigo/black with Morinda citrifolia. 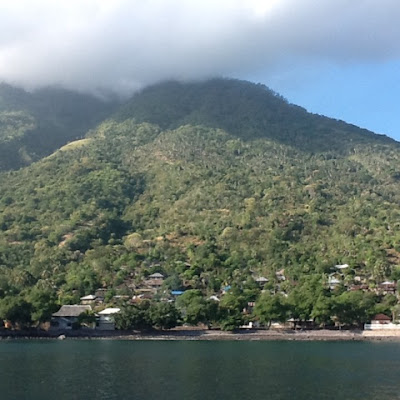 The quality of the weaving was good, and there were many pattern variations so shopping was a hard task! 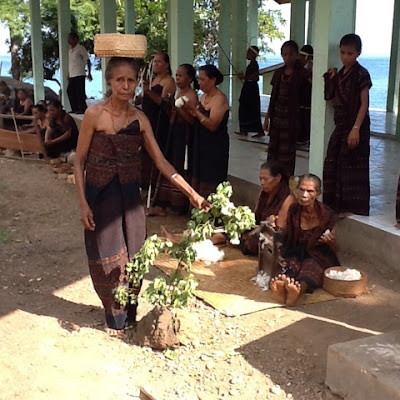 This photo shows Ibu Martine showing how they collect the cotton from the plant and then process it. These are some of the beautiful cloths they weave, all handspun and naturally dyed. 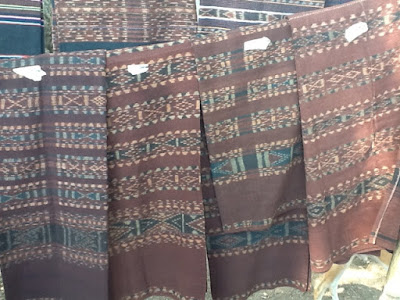 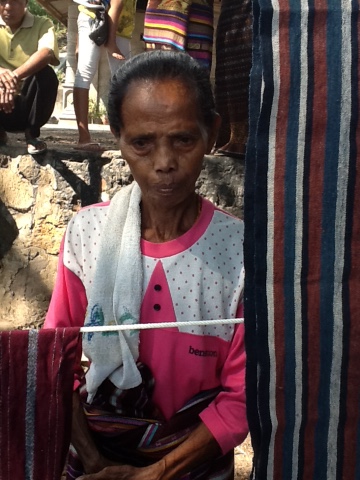 I bought a few scarves from Ibu Fatima. During one of our nightly lectures by David and Sue, we learnt about the marriage system on this island, about dowrys and counter prestations from the grooms family to the bride. Many of these alliances are asymetrical. An interesting fact was about the  status of these gifts and the value placed on them. In this village there are two sisters who have a cloth that is so valuable that no-one can afford the counter prestation..... This means in effect that they cannot marry and are destined to live with this cloth for the rest of their lives, as the cloth does not just belong to them but the whole village. These are the two Ibu with their cloth below. 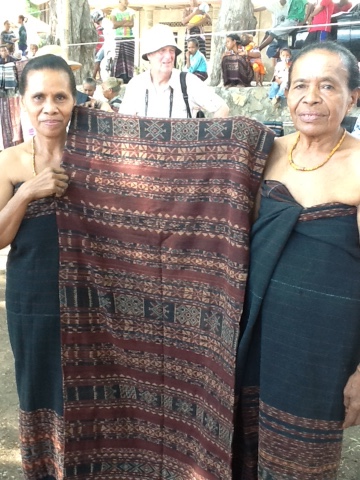 After lunch on the boat and a rest from the midday heat, we headed over to another village called Jontana. This seemed completely different in feel, and I didn't think the weaving was of the high standard we had seen previously. However they had produced the most intense black yarn I have seen during the trip and from their answers to our questions they said it was just indigo but it had taken two years to produce. It certainly smelt like a rich indigo, however I am not sure things may have got lost in translation.

David and Sue organised a trip up to the ceremonial village, halfway up Ile Api, which is only used once a year during the Bean Festival. There are some very sacred objects up there in one of the four chief houses, including some large elephant tusks. Only six of us took up this adventurous opportunity because the road is extremely rough and unpredictable. Our open bus in fact could not make it all the way to the village so we had a short uphill walk to get there. 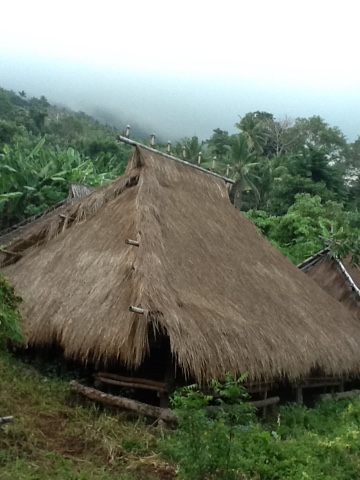 It was certainly berluantan kita besar - our big adventure - and I thank them for ensuring my core muscles were put to good use. It was dark by the time we descended the volcano, took the dinghy back to the ship and sat down with a well deserved icy cold Bintang.