This morning we wove our way south through the spectacular Mbuli Valley in order to reach the remote weaving village of Nggela.  After travelling that road in the back of the bus I certainly realised why it would take perseverance and the promise of some lovely textiles to go there.  Here is the photo of the road less travelled, even at 10km per hour: 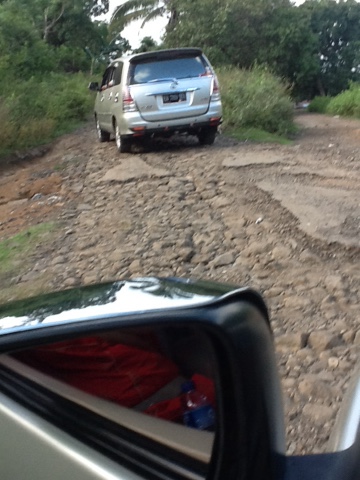 On the way back I made sure I was in an airconditioned car rather than the bus......however, just as Sue and David promised, the views were great when you weren't looking over the edge of a steep cliff. 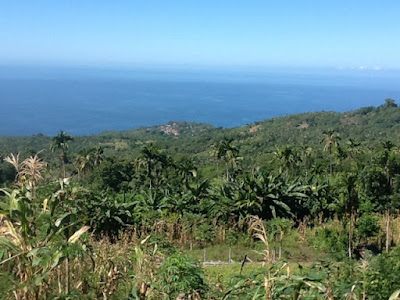 The villagers welcomed us with dancing and music and the largest displays of textiles you could imagine. Apparently there are about 300 weavers in the village and beyond, but if I heard correctly there may have only been about 25 in the village. 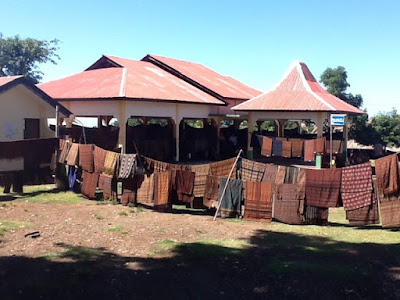 The women gave us wonderful displays of carding and fluffing cotton, reeling, warping, natural dyeing, ikat and preparation for weaving. One of the processes I was particularly interested in was the combing of a sizing medium, made from boiling rice, tamarind seed and juice and candlenut flour together onto the warp which was then left to sit for a day before warping up on the loom. This procedure kept the fibres straight and aligned, I guess making it easier to separate and manage them in the fine-tuning process of shifting and bundling the threads in heddles before weaving takes place. 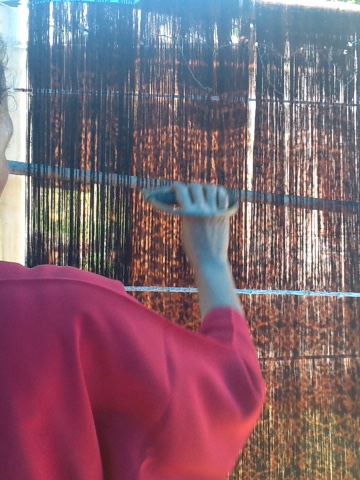 The Lio weavers in this village, like many others, have adopted the practice of using commercial dyes and cotton to make life easier for weaving cloth for everyday use, but they still use natural dyes for special cloths including the ceremonial lawo batu. After lunch we were invited into the mosa laki's hut, in fact we went into two, to see objects of cultural importance in ceremony and life. It was pretty dark inside and I was fearful of falling through the bamboo slatted floor, being the Westerner I am, which would have meant getting very up close and personal with the pigs directly below. 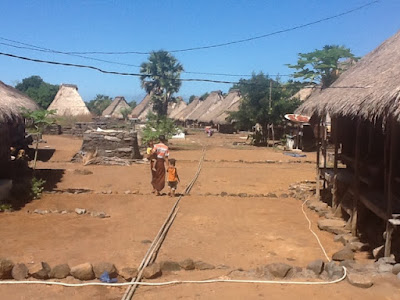 The village itself is boat-shaped with two rows of tall thatched houses on either side of a central area, which held the 'belly-button' of the village, a circle of four stones with a centrepiece which we were forbidden to touch. After the walk around the village we were eager to go and meet the weavers and do some retail therapy, which ticked quite a few boxes for our group! 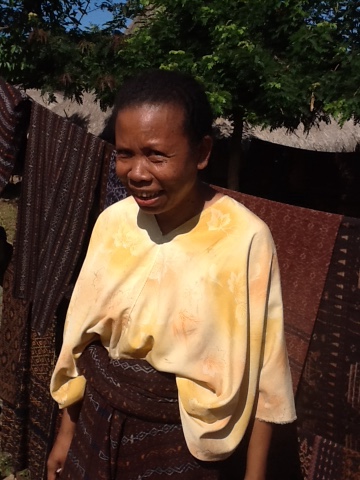 I bought a small ikat from this woman whose name I did not write down, but I will be more diligent and respectful in the days to come.
Tonight we have a pesta or party celebration put on by our hosts, the Kalimutu Eco Lodge, and tomorrow we take a trek up to the volcanic craters.
Untuk besok ( till tomorrow)
Julie
Posted by Julie at 14:15