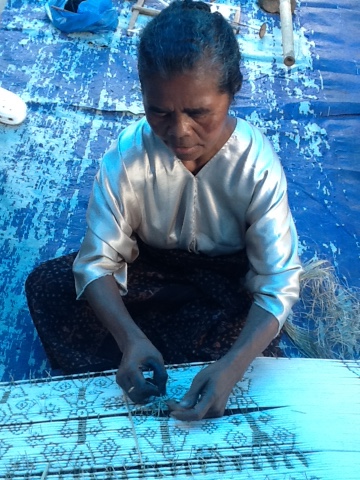 The first day of our pre-cruise trip started at 5am this morning to get to Denpasar airport to catch the 7.20am flight to Ende, on the south coast of Flores. The plane actually has three stops - Labuan Bajo-Ende-Kupang and those travelling onwards get to sit in the plane on the tarmac until new passengers arrive. Our group consists of so far of 11 people from the US, Australia, UK and Taiwan, but we will be joined in the next few days by a couple of others to go on the cruise.
We were met at Ende airport by David and Sue Richardson who have developed this tour with Seatrek in Bali, this being their third trip. Our first stop was  to visit the nearby district of Ndona to visit some Lio weavers. In the photo above, Teresa is quickly tying her warps for ikat. The pattern is in her head and despite her age and agility issues, her fingers were very nimble, so we could see the pattern emerging as bundles of warp threads were bound with strips og Gebung palm leaves. 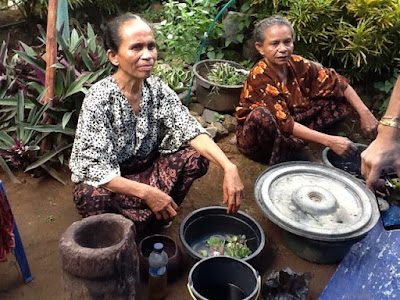 We were also given a demonstration by several of the women on their natural dyeing processes using Morinda citrifolia and indigo from Indigofera tinctoria which grows wild. 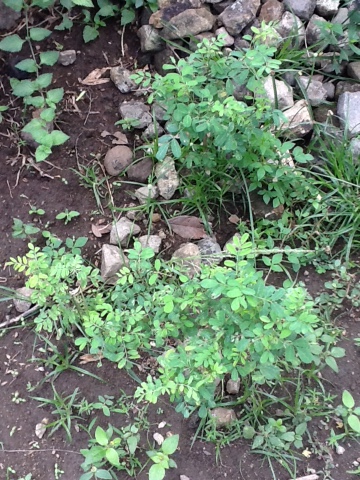 Weaving the ikats was done on backstrap looms and the women bought out many beautiful textiles to show and for sale, similar to the ones they are wearing in the above photos.

Our next stop was to the village of Saga, where we were greeted with drumming and dancing by local school children. 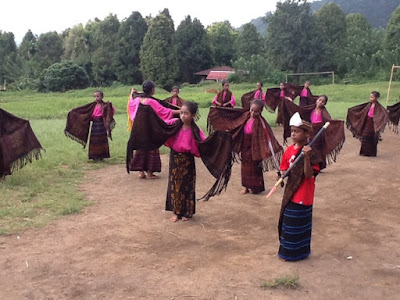 We were welcomed by Maxi, one of the mosa laki (traditional leaders) of the area and after a delicious lunch in one of the schoolrooms he took us on a tour of the village with historical homes with wonderful architectural details and carvings. 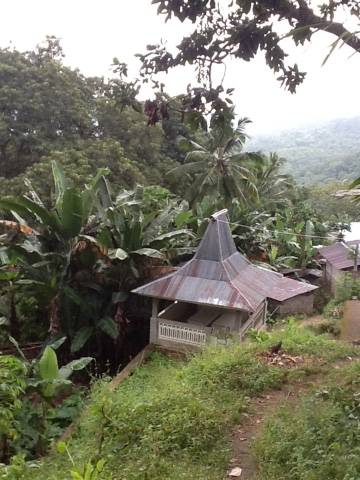 Driving through this lush, mountainous terrain after coming from a wintery Canberra is quite surreal at the moment, as are the intermittent but heavy downpours.
Wending our way through some fantastic scenery, we reach our final destination for the day, the Kalimutu Eco Lodge. We make this our base for two nights as we explore further the textiles of the south coast of Ende. The view from my room is amazing, looking over misty rice fields, hearing the turbulent river rushing by below, with a stormy grey sky just threatening to soak us again. 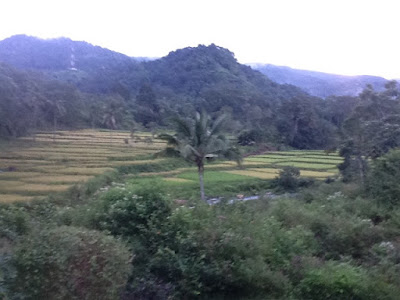 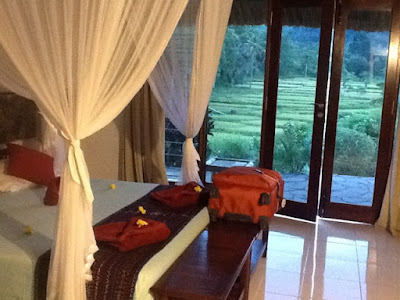 We are given a few hours to fest and relax before pre dinner lectures on Ende textiles by David and Sue followed by a delicious dinner complete with a birthday cake for Kate, one of the women on our trip. Most of us are eager to get to bed early to catch up on sleep and ready for an early start tomorrow.